ESD Explained – What every Dock Owner Needs to Know About Electric Shock Drowning.

Kevin Ritz lost his son Lucas to ESD in 1999, and he shared his story with Seaworthy in “A Preventable Dockside Tragedy” in October of 2009. Since his son’s death, Ritz has become a tireless investigator, educator, and campaigner dedicated to preventing similar tragedies. “ESD happens in fresh water where minute amounts of alternating current are present,” Ritz said. 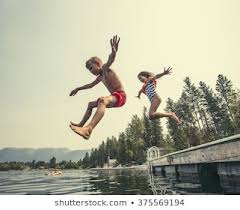 What does “minute” mean exactly? Lethal amounts are measured in milliamps, or thousandths of an amp. When flowing directly through the human body, these tiny amounts of current interfere with the even smaller electrical potentials used by our nerves and muscles. Captain David Rifkin and James Shafer conducted extensive testing of all aspects of ESD for a Coast Guard study in 2008, including exposing themselves to low-level currents in fresh water. “Anything above 3 milliamps (mA) can be very painful,” Rifkin said. “If you had even 6 mA going through your body, you would be in agonizing pain.” Less than a third of the electricity used to light a 40-watt light bulb — 100 mA — passing directly through the heart is almost always fatal.

Why fresh water and not salt? Salt-water is anywhere from 50 to 1,000 times more conductive than fresh water. The conductivity of the human body when wet lies between the two, but is much closer to saltwater than fresh. In saltwater, the human body only slows electricity down, so most of it will go around a swimmer on its way back to ground unless the swimmer grabs hold of something — like a propeller or a swim ladder — that’s electrified. In fresh water, the current gets “stuck” trying to return to its source and generates voltage gradients that will take a shortcut through the human body. A voltage gradient of just 2 volts AC per foot in fresh water can deliver sufficient current to kill a swimmer who bridges it. Many areas on watersheds and rivers may be salty, brackish, or fresh depending upon rainfall or tidal movements. If you boat in these areas, treat the water as if it were fresh just to be on the safe side.

Why alternating current and not direct current (DC)? The cycling nature of alternating current disrupts the tiny electrical signals used by our nerves and muscles far more than the straight flow of electrons in direct current. “It would require about 6 to 8 volts DC per foot to be dangerous,” Rifkin said, or three to four times as much voltage gradient as with AC. “Regardless of the type of voltage, the larger the voltage, the larger the gradient over the same distance.” There have been no recorded ESD fatalities from 12-volt DC even in fresh water because there is less chance of the higher voltage gradient necessary developing with DC’s lower voltages. 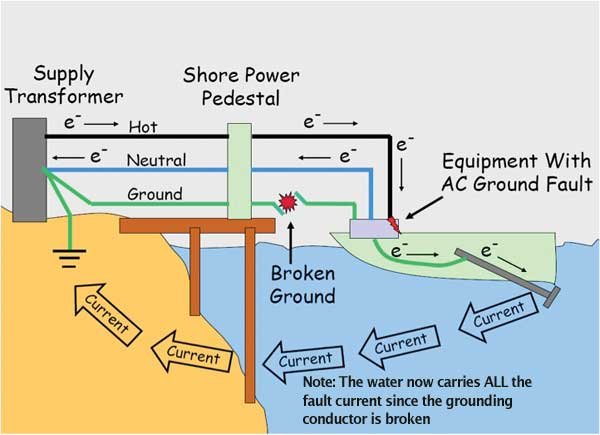 For stray AC to get into the water, there must be an electrical fault and a fault in the safety ground. (Courtesy David Rifkin)

How does that electricity get into the water in the first place? In a properly functioning electrical system, all of the 120-volt AC current that goes into the boat through the shore power cord returns to its source — the transformer ashore or on the dock where it originated. For any of that current to wind up in the water, three things have to occur.

If all of these conditions exist, then some or all of the boat’s underwater metals, such as the propeller, stern drive, or through-hull fittings, will be energized, and electricity will radiate out from these fittings into the water. If the boat is in saltwater, the current will dissipate without doing damage unless a diver grabs hold of the energized metal. In fresh water, 120-volt AC will set up a dangerous voltage gradient that will pass through any swimmer who bridges it.

Final Word Inspections does a thorough electrical inspection of every aspect of the docks electrical system. We have a floating electrical meter to detect any current bleeding into the water. This past 2018 we found 4 out of 6 dock around Lake Lanier with current in the water. There’s always a reason and it can be fixed by a qualified electrician.